The first thing I notice when I arrive at the two-room Mojave Cabin on a cold, sunny early January afternoon in tiny, remote Shoshone—a Mojave Desert town 3 hours north of the Inland Empire—is the huge scorpion mounted on the wall next to the front door…..

It’s a wire scorpion, crafted simply, and in a flash quick as a scorpion’s sting, I know I’m where I need to be. I’m now officially the Writer in Residence for the month of January, 2015 this one café, one gas station town which proudly calls itself the Gateway to Death Valley. And, of course, the mascot of the small, K-12 Death Valley Public School, is the scorpion!

And why does this all matter? It matters greatly to me, because I’m about to write, and hopefully finish, the first draft of a book which takes place largely in the Mojave Desert. I’m here to dig in and find the quiet, space, and scenic inspiration to make major headway writing my memoir about my years fighting wildland fires for the Bureau of Land Management’s California Desert District during the late 1980’s, when I was an undergraduate at California State University, San Bernardino.

I’ve left the comforts of life in urbanized Palm Desert far behind; land of a new Whole Foods gourmet grocery store and a huge Apple store where I can go for all of my iPhone and MacBook Air needs.

After I quickly settled in, I stepped outside to inhale the crisp air and austere sunset. The scorpion seemed to humor me, as I’ve quickly discovered that there’s neither cell phone nor internet service here. There’s no landline phone in my room, either.

I’m on my own, with a palette of January days stretching ahead of me, waiting for a flash flood of words to spill onto the page, and hopefully while I’m here, page after page will capture the magic and hardships and transformational journeys I took across the storied Mojave landscape in my younger years, working on fire after fire in some of the remotest geographies in the world, which happen to be in the backyard of the sedate Inland Empire and Coachella Valley.

In the year 2015, it’s easy to be seduced by the easy and ubiquitous conveniences and reliance on internet technology, and it seems a little harder each year for me to climb my way back out into the remote Mojave Desert wildlands I grew up in, lived in for most of my adult life, and know so well, like the inside of my soul.

In fact, I’d argue that the Mojave Desert is part of my soul, a part that never lets me rest, and compels me to a place like this, to slip like a Mojave Green rattlesnake out of the creatively restrictive skin that living in urban environments encases me in, so that I can write the way I really need to write. Here, I can’t spend hours watching Netflix, or checking Facebook, or scrolling through my twitter feed for the latest, repetitive headlines, or playing around on my new iPhone 6. Nope. Here, the rattlesnakes and scorpions and raw cut desert views of mountain and alluvial fan will dominate my view, and demand the attention they deserve.

In fact, I’m writing this in the old west Crowbar Café, the only place open tonight, and I’ve just helped a young, frightened tourist from Brazil, who drove from Las Vegas and got lost in Death Valley after dark on a night where temperatures are forecast to dip far below freezing, and somehow found his way here, guided by the Crowbar’s lights. 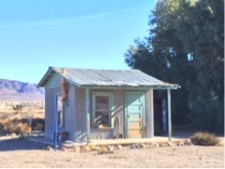 He said he lost his way because there was no cell phone service out here, and therefore didn’t have his map app to use. But I think there’s more to it than that. I think the Mojave Desert took over his journey, and forced him to stop, and wander, and, in the end, to really learn to see, before he finds I-15 and returns to the world of built-in answers and predictabilities. He was overjoyed when I told him that as he heads to LA tonight, following the directions I drew on a napkin while sipping turkey soup, that he’ll be able to use his mobile device sometime after he passes through Baker.

As for me, I’ll  head back into the dark desert night soon, and try to find my way back to Mojave Cabin, where I’ll sit with no phone or internet, and undoubtedly stumble and struggle to evoke, with mere words, a world I once traversed so easily, the world of the burning Mojave, where I never relied on an app to save my life, and never thought I’d be mocked by a wire scorpion daring me to write about it all. 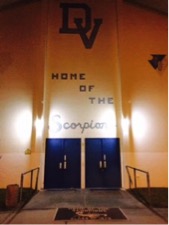 Inlandia: A Literary Journey is the official literary journal for the Inlandia Institute. For more information visit www.inlandiainstitute.org. View all posts by inlandiajournal